The 10 biggest fears of Colombian women

will give you a better insight of the reality that Colombian women Â  have to face Â every day.

1. Walking down a lonely street

Colombian women would never consider walking down a Â lonley street. Even some men are also afraid of this.

When Colombian women call a taxi, they send a text message to their family or friends with the license plate number of the taxi.
A family member will wait at the door so the woman can quickly Â get out of the taxi and Â go into the house.

Being robbed or sexually abused when taking the wrong taxi, is one of the biggest fears Â that affect Colombia women. 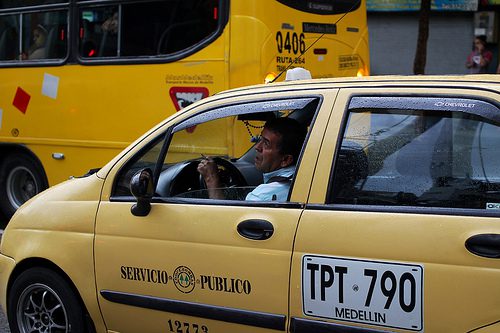 3. Withdrawing money from an ATM

Almost all women always ask male family members or co-workers to help them to go to withdraw money from an ATM, because then they feel Â less likely to be robbed.

Although men are also frightened about mugs and street robberies, thieves often seek female kindness for general information and incidentally steal Â her things. (I remember when I once asked a Colombia business man on the street for a direction and he actually ran away from me.)

5. Being accused of being guility of her own tragedy

“She was seeking it, she was very annoying or irritating, she was dressing too sexy, she had almost no clothes on”
There so many other phrases Colombians use to describe a situation in which a woman has been attacked.

6. To be caught in a traffic jam

Women who are beeing caught in traffic jams ALONE Â are very attractive to thieves who watch them alone in the car Â with a bag full of valuables in the front seat and even better if it’s a small car.

in Colombia are a big topic in the media and very common. Colombias Â newspaper “EL TIEMPO” Â revealed that hiring someone to execute an acid attack would cost only 100,000 colombian pesos OR LESS (about 50 USD). Â In one of the most famous cases a kid has been given 3000 pesos (about 1 dollar) to throw acid into a womans face, which had to undergo 80 suregies. Motives are often: Â Envy.

8.Â Those who ask for coins:

A woman in a car or bus stop who is waiting is an easy target for thieves, beggars or “car-window-cleaners”. The vulnerability by lower physical strength is obvious.

It seems that colombian women are used to Â being in a space where they believe there is no discrimination because they have access to education, work and entertainment, but still they earn abour 20 percent less than men in the same positions and have a dual role with housework. Despite laws that promote equality, nothing happens.

Passing amid construction workers or getting too close to someone in a Transmilenio “Bus in Bogota” can lead to offensive compliments.(Being a victim of an offensive complinet can virtually happen everywhere in Colombia). More than the fear itself, it is the fear of Â feeling Â intimidated by the lasciviousÂ look of a man or group of men. It gets every worse if the woman wears a Â skirt or shows some cleavage.