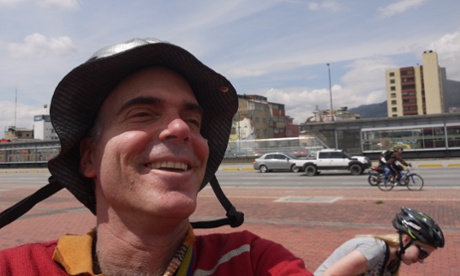 How long have you lived in Bogota?

I’ve lived in Bogotá for about nine years. Previously, I lived in Caracas, Venezuela; Asunción, Paraguay; La Paz, Bolivia; and Viña del Mar, Chile. Before moving to South America (initially for just one year, to improve my Spanish), I lived in the southern United States. I’ve now lived in South America for about 15 years.

Of the South American cities I’ve lived in, Bogotá is less exotic than some, such as La Paz, but lots more liveable than a chaotic, dysfunctional city like Caracas.

Bogotá is interesting and frustrating for the reasons why all big, developing world (and many developed world) cities are interesting: the efforts to grow in a humane inclusive way, in spite of special interests which want the city to profit them.

I have a small business which does bicycle tours and bike rentals, called Bogotá Bike Tours.

What was your first blog post – how do you feel about it now?

I believe that it was a post about a violent, impoverished neighbourhood in South Bogotá. I’m not sure I’ve gone back to reread it since. I usually feel uncomfortable rereading things I’ve written. Call it insecurity.

The sad thing is that today I’m sure I could write the same post and it would still be accurate. Colombia’s economy has grown, but its troubles of poverty persist.

Back when I was a journalist, I often felt frustrated because editors wanted stories about the dramatic – while the boring things are often much more important. The great thing about blogging is that I can write about whatever I like – even if nobody reads it.

What team do you support?

I think sport is great, but am not much of a fan of professional sports. Pro sport, particularly football, has ugly undercurrents in Colombia because of sometimes fatal violence between gangs of fans from rival clubs. The athletes I most admire here are probably the blind footballers who practice in the National Park.

They are a mother and daughter who love dogs, and sometimes seem to have a dozen rescued street dogs in their two-storey house. I sometimes see them on the street at midnight walking multiple dogs.

I live in La Candelaria, Bogotá’s historical centre, which sometimes feels like a small town, despite being set in a city of 8 million. People walk here, and so you encounter neighbours on the street. And it’s a neighbourhood of colourful eccentrics, such as the artistic, educated homeless people, the guy who makes his living by rapping for coins from strangers and the guinea pig racers.

Tell us a secret only you know about your city

I don’t think there are any. But I believe the biggest ‘secrets’ of any place are the problems we ignore because they’re in plain sight.

Colombian activists love to protest, and in particular against the usual demons: big corporations, GMOs, bullfighting, neoliberalism … But the things which are really impacting our lives here are boring and routine: lack of enforcement of pollution and transit laws, the shift from traditional to refined, fattening foods and a sedentary lifestyle. These are the kinds of things I like to write about.