Cartagena is one of the top destinations for tourists from all over the world. The city itself can be described as charming, romantic, vibrant and colorful.  it`s 500 years old historic center and it`s beauitufl beaches invites yearly a lot of tourists. The city gives us a tropical and romantic touch and it`s  filled with many fine jewelry stores selling emeralds. We recommend you to have at least one Colombian friend with you who can advise, you when you are considering to buy some emeralds.

You will find an overbearing police presence in Cartagena.
The great writer Gabriel Garcia Marques was here at home. Cartagena is also well known for it`s talented chef,s trained in the finest kitchens of the world who add their own twist to a native cuisine which itself combines Caribbean, Latin, Asian and Mediterranean influences.

Addictive seafood, ceviche, coconut rice and coconut lemonade are dishes to be found on every menu, and just about every street corner as well. 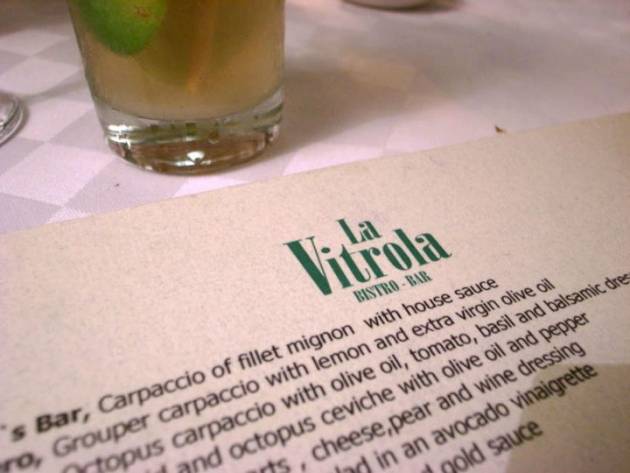 La Vitrola is a very comfortable place with live music, a bar and a restaurant. I`ts speciality is different dishes of well prepared sea food. Try the typical seafood dish ” ceviches con camarones” with fried plantains, a very delicious and creamy one. The grouper carpaccio, which is an almost transparant raw white fish lightly finished with olive oil. 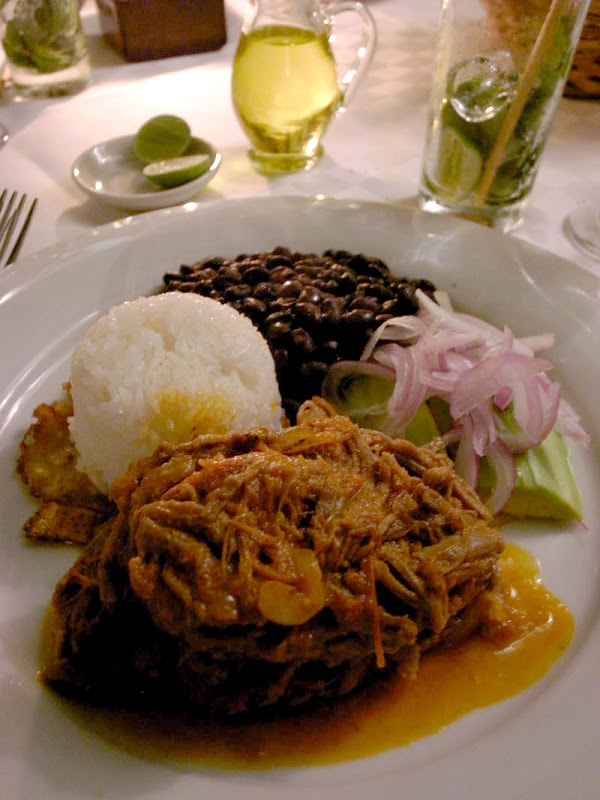 Grouper filet in a tamarind sauce with chile was superb, as were the camarones en hamaca, garlic spiked shrimp perched on fried green plantains and topped with crema de queso.  Or seafood risotto`s. 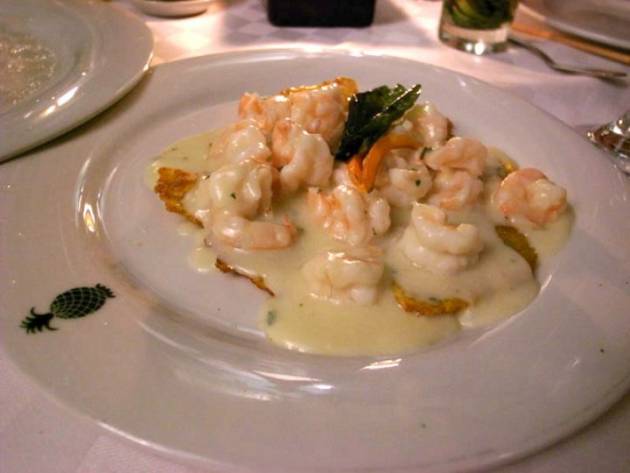 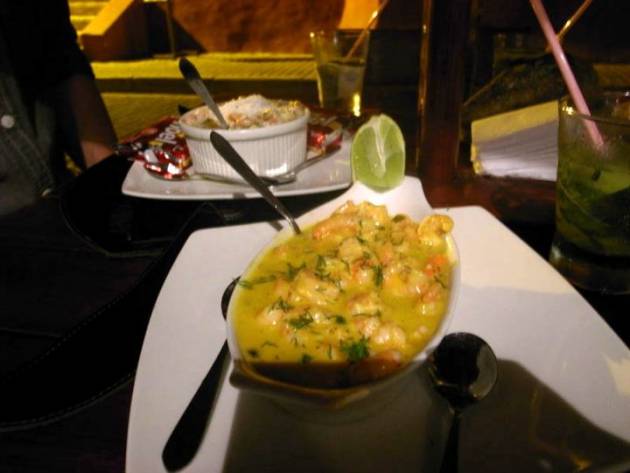 The chilled citrus shrimp ceviche with calamari, is pleasantly tangy, snail, and octopus, though the place is known for its more creative dishes—those ceviches incorporating oddball ingredients like barbecue sauce, mozzarella cheese, or coconut cream (some of which are served hot). Wash everything down with a basil mojito or refreshing michelada (beer and lime juice over ice, with salt).

Beaches near to Cartagena

Playa blanca will give you a tropical and idyllic feeling. It`crystal clear water and the shite sand beac is only 15 min. boat ride from the downtown of Cartagena. Make sure that you are on one of the faster speed boats because some tour boats go much slower. The location is on Baru island. 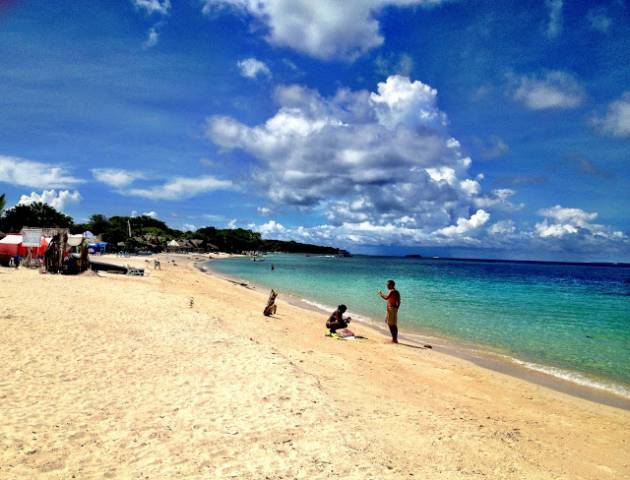 Besides the Islas del Rosario, Playa Blanca ranks high among Cartagena’s most popular and worthwhile beaches. The white sand beach is only a 15-minute boat ride from downtown Cartagena. Many of the same boats that offer passage to the Islas de Rosario also stop at Playa Blanca. When arranging the boat, confirm that you are on one of the faster speed boats. Some tour boats go much slower, cutting into your beach time. The beach is located on Baru island, just south of town. Unlike the beaches right in Cartagena, you needn’t worry about peddlers bothering you while you lounge and tan, and the sand and water are notably cleaner. 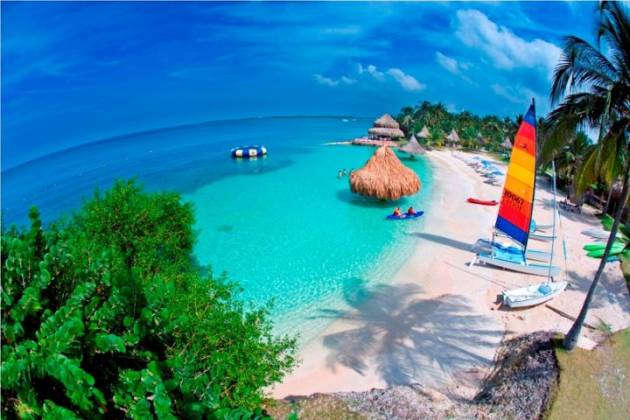 The island of Rosario is one island who receives the most attention. This island is also part of a national park. The park consists of serval small islands, each one is reachable via boat. They are 28 miles away from downtown Cartagena. The perfect place for snorkeling, swimming or just relaxing within one of the most beautiful place on Earth. 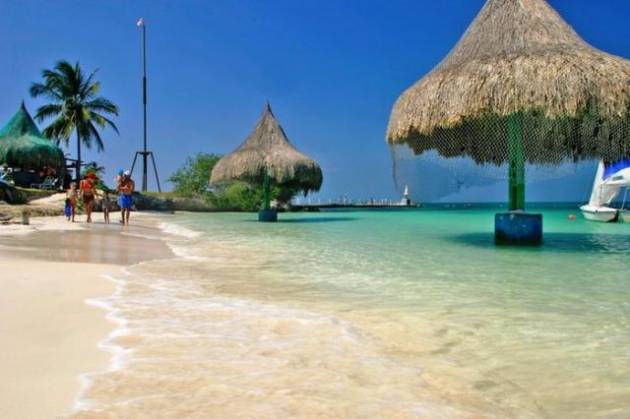 The beaches of the island of San Bernardo are basically even cleaner, pristine and quieter than any you`ll find on the mainland. On some seasons there are stron sea currents so this island is not recommend for poor swimmer or families.

Cartagena`s beaches from the south you wiil find Bocagrande, El Laguito and Castillo and to the north there is La Boquilla and Marbella. Bocagrande is the tourist place with a lot of great hotels, restaurants and discos. The beaches here aren`t pristine as they are on the above mentioned islands. If you are interested in getting to se the coral reefs than a trip to one of islands would be perfect for you. The coral reefs can`t be found on Cartagena`s city beaches.

Click here to read our article about the the historic center of Cartagena.