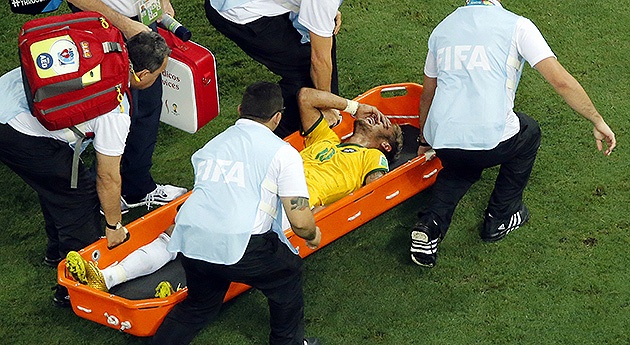 On the 4th of July in the game of Brazil versus Colombia, one of the Doctors from the Brazilian team, Jose Luis Runco, announced that Neymar had a transverse fracture of the third vertebra of the loin and therefore has been excluded  of the World Cup 2014.

Before that diagnosis has been made, Neymar already has given up the possibilty to continue attent to the World Cup. After the player from Barcelona has published a video in which he appreciated the support from his fans. In this appereance and while going out of the hospital the famous soccer player has been moving in a wheel chair.

Last Tuesday 08.07.20104 another video appeared where you can see him walking in front of his house.

Of course, then a lot of sceptics appeared who were talking of a fraud. The Colombian newspaper Semana.com consulted the orthopedist Camilo Parada from the Hospital “Clinica Marly” in Bogota to ask him wheter a vertebral fracture implies that a patient keeps permanently disabled or not.
“There are cases where the fracture is not displaced, where the patient does not have to necessarily keep lying in bed for 3 months.” said the  orthopedist  Parada.
Orthopedist Parada commented that it is crucial if the fracture is displaced or not. “If you don`t need any chirugical work then it`ll be fine that way.”
“In the case of fractures who aren`t displaced – like in the case of Neymar – one can continue a daily live without any problems, what Neymar won`t be able to do for a while are activities like playing soccer”, said the expert.
The expert furthermore explains that Neymar probably doesn´t wants to be operated because he fears to suffer again from the pain causes by trauma of the injury.
For this reason he hopes to regenerate without an operation.With that explanation the miracellous recovery of Neymar is clear, which results as a normal evolution of an injury.