Colombia is a very attractive place for buying and investing 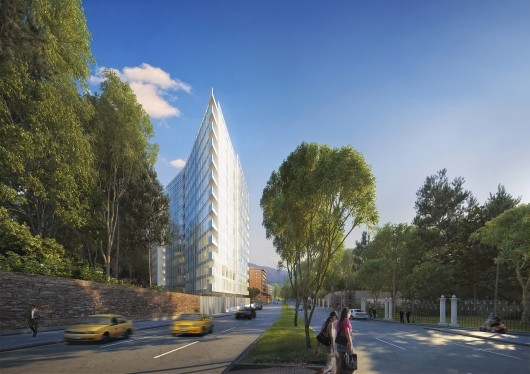 Like the residential project Vitrum in northern Bogota, led by the renowned architect Richard Meier, or the presence of the Peruvian chef Gastón Acurio’s restaurant Astrid & Gastón, which is in the same vein as the ones he opened in San Francisco and Madrid. Bogota nowadays is as a magnet for foreign investment targeted at different areas.
North View. Image © Richard Meier & Partners

It is not just the Colombian capital Bogota that has cought the attention businessmen from far away, nor is Bogota the only city with purchasing power. Cartagena is located less than an hour away by plane and has become the most elegant, fashionable city in northern South America. It has a substantial infrastructure for events, is a meeting point for addressing business agendas and holding corporate and political events, and furthermore, it has a busy port that is very convenient due to its access to the Caribbean Sea.

The economic conditions have improved in Colombia, which has given rise to the resurgence of a larger productive and better-off middle class. As of May 2014, unemployment figures are under two digits at 8.8%, according to figures from the DANE. There are more job opportunities, better incomes to be had, more possibilities for credit, and that Colombian real estate has notably increased in value over the past few years.

It is increasingly common to become wealthy in Colombia through work and entrepreneurship. According to a WealthInsight study from last October, the country has generated more millionaires than countries like Brazil and Mexico.

Robert Kunzel, the general manager of GPCars, a local Maserati importer, stated that “Something is definitely happening in Colombia.” Last year, the Italian luxury brand sold five cars valued at US$250,000. Given the conditions, Kunzel hopes to sell 70 in 2016. “This was unthinkable a decade ago.”

Luxuries are increasingly abundant in Colombia, the country is also exporting them. Such is the case for the brands created by Silvia Tcherassi and Tatiana Santo Domingo, among others, which are like we from mycolombianwife.com promoting a positive image of the country around the world.