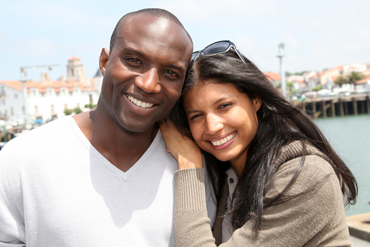 First off,  you should know that about 20 % of Colombians are actually of african descent  – black or mixed with black (Mulatto´s).

Mestizo is a term traditionally used in Spain and Spanish-speaking America to mean a person of combined European and Native American descent.

Mulatto is a term used to refer to a person who is born from one white parent and one black parent, or more broadly, a person of mixed European and African ancestry in any proportion

The cities with the mayor black population in Colombia are the following:

Only a very small percentage of Colombian women on the website indicate a preference for skin color.

Race does not play much of a role in Colombia, due to the greater mix of people.
However, from our experience, we have seen with the Black men who have used our  Tour service is that they are just as successful as other men.

Good qualities matter much more to Colombian women than race.

Looks, weight, height, personality and presentation rank way above race as a point of interest.

We can assure you that most men will do much better in Colombia than they can in the United States regardless of their race.

Get to know Colombian single women that are interested in finding a life partner.